Introduction to The Chillum – What you Need to Know

The Chillum is not the most widely known method of smoking cannabis, but its special benefits and experience are bringing this fascinating artifact back. Here is what you should know about these traditional pipes.

For those looking for a somewhat old-fashioned way to enjoy their cannabis, the chillum is a great option. Veteran smokers will be especially attracted as they will remember the days when the Chillum held a place of honor, but everyone will enjoy what has been widely called the best way to enjoy marijuana.

WHAT IS A CHILLUM: A LITTLE HISTORY

While no one is sure where the straight conical pipe was originally invented or who were the first people to use them, we are sure that its first purposes were to smoke cannabis and opium. Anecdotal record begin mentioning their use somewhere around the 18th century and they were used by Hindu Sadhus and Monks from India and Himalayas.

The famous phrase “boon Shankar” originates with the use of the Chillum and was spoken as a holy man would raise their chillum of cannabis to their head and invite the Shiva and the rest of the Hindu pantheon to commune with them as they partake.

Western stoners began to show a very acute interest in the chillum during the 60’s. This was largely due to the spiritual significance of this special pipe and the traditional value from passing a chillum around a group of friends. During the 60’s the use of a chillum brought a deeper connection between friends sharing it and the chillum was an essential item for the cannabis kit.

For these reasons, the chillum is still a very significant device for those that can remember this period of time. Today’s younger generation of smokers have not fully embraced this method of smoking due to the wide variety of paraphernalia that exists on the market today.

THE EFFECTS OF USING A CHILLUM

Another reason the chillum is so popular is because of its very unique effect. Even though the construction doesn’t seem as complex as other pipes and options on the market today, the experience is very different.

The special design of the chillum allow for large amount of smoke to be cooled and collected with each hit. This results in a smoke that is both cool and smooth as well as considerably more potent effect then you can expect from a traditional pipe.  Furthermore, larger chillums will result in a larger amount of smoke. If you’re interested in one, then this site provides wholesale chillums at great prices.

Traditionally, you will need about 0.5-1.5g of hash and as much tobacco as you can find in the average cigarette. Dry herb can be used but hash is the traditional option. Crumble the tobacco between your fingers and then rub it with your hand to spread it evenly across before loading it into the chillum above the stopper.

You will want to place a filter over the mouthpiece before you begin inhaling. Light it with a few short puffs to spread the glow evenly before taking the final deep hit.

Finally, make sure that you clear the chillum completely of the smoke you have created before you pass it off to the next person. This will ensure that future smokes are clean with no lingering flavors.

THE TYPES OF CHILLUM

The chillum’s design hasn’t changed much throughout history and they have always been available in a wide variety of different materials. The type of material chosen for your chillum will affect the experience and is worth considering. Glass chillums have a nice cooling effect, but tend to smash to smithereens when being passed around the group. Wooden chillums are pretty and ornate and a generally economic choice. Other materials you will find include clay or soap stone. 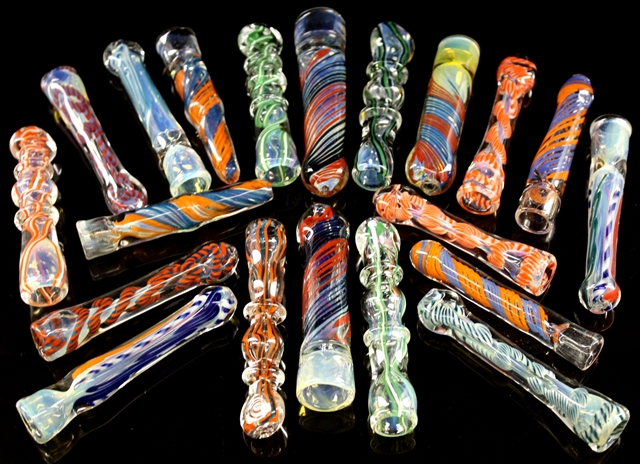