Hannibal Buress is one of the funniest people on the planet. His effortless, nonchalant approach to comedy has made him one of the most celebrated comics of our time. With several hilarious on-demand specials on Netflix (and others), dozens of television and film appearances and writing credits, as well as few massive tours under his belt, the 37 year old comedian shows no signs of slowing down. Fresh off his NBA Celebrity all star game appearance, he just announced an intimate pop up event at Denver’s famous Comedy Works, and we got a chance to ask him some questions in anticipation of the show. Check out the interview below, and make sure to RSVP for a chance to get FREE entry to the exclusive performance.

Get Em High: What’s good Hannibal!? People are excited about the Pop Up show (tomorrow) in Denver. What’s the concept behind doing these essentially unannounced, FREE pop ups in small venues, with no blatant corporate sponsorships etc., as opposed to a traditional theater tour?

Hannibal: I’m doing it to build some buzz for bigger plays in the area. I’ll probably do a few shows at the Paramount soon and put together something at Red Rocks after that.

GEH: Any reason you chose to include Denver in the mix?

GEH: You just played in the Celebrity All Star game in Chicago with some of the most iconic people from the CHI, and got to shine light on your Melvina Masterminds community center in the city. What was that whole weekend experience like to be back in your hometown just flexing on a huge level?

Hannibal: It was an amazing experience to play in the game. It was insanely surreal. Before that my public basketball experience was limited to the gym at St. Paul Lutheran School in Chicago in 1993. There were was less people there. It’s a huge adjustment. Training for the game was really fun and a lot of dope people had a hand in getting me ready. Skills trainer Jordan Lawley, former NBA star Baron Davis, my cousin Ron Lamont, a bunch of people at the Y that didn’t pass me the ball even though I was open, Steph Curry’s skill trainer Brandon Payne. There were a lot of people that helped me on my road to 0 points, 1 uncredited assist, and 1 rebound.

Being at home during an event of that scale and being involved in the weekend in a major way was wild. The weekend flew by because there was always something amazing going on. I wish I did a better job of documenting the whole thing because it’s a real blur. The first pitch competition that we did for MM was a success and I’m really looking forward to doing many more.

GEH: You’ve been getting more and more involved with music lately, including the tracks you did for the all star weekend. You also have an appearance in the RNP Video (YBN Corade x Anderson .Paak) – Hilarious video, one of our favorites of last year, How’d you end up getting involved with that?

Hannibal: The amazing Mari Davies also reps Cordae so I heard about it from her. That was a really fun shoot. I didn’t do much acting in 2019 so I think being on a set was really energizing. I landed a couple hours before the shoot and went to cryotherapy straight from the airport. I think it put me in a good zone to perform. There’s a lot of freedom to just wild out on a video set and you try to give the director a bunch of different performance options.

Hannibal: “I can see” of the latest Mac Miller project was on a repeat a lot. I like a lot of instrumental stuff to write to. Strings of Light by Youssef Kammal. Here’s a playlist I was training to.

GEH: You’ve been a proponent of legal weed for a minute, it’s finally legal in Chicago have you had a chance to check out the dispensaries out there? How does it compare to other legal cities you’ve been in?

Hannibal: I haven’t been to the dispensaries in Chicago yet. I went to this weed bazaar/ farmers market thing in Lombard in the suburbs.

GEH: Any plans of getting more involved in that space as a businessman?

Hannibal: I have some stuff cooking up. I’d like to have a couple products.

GEH: I’ve seen you say that the wrong strain can be a terrible experience for you, what are some strains that you DO like?

Hannibal: I don’t even know. My tolerance is low. Whatever strain it is, if I’m smoking it I just need one hit and that’s it.

Hannibal: I’m an edibles guy all day. Mints, gummies, etc…I like to know exactly what the weed is gonna do to me. Everything else is a wild card. I love Breez because they have a graph on theirs. I don’t know if it’s accurate but I appreciate it.

GEH: What’s the craziest experience you’ve had with edibles?

Hannibal: I ate too many and I was pacing in my hotel room in Las Vegas. Pacing like a madman. Fitbit was getting hella steps on it. Luckily I had a suite because I really needed the walking room. After lots of pacing I laid down in bed just hoping for the high to go away. I get a FaceTime from Dave Chappelle. In my high mind I think that someone saw me pacing through the window and then they called him to tell him that they saw me tweaking and then he called me. I’m sure that wasn’t the case but I did not answer the call because it freaked me out.

GEH: Thanks for taking the time, we’re hyped for the show. Any shameless self promo? Shoutouts? 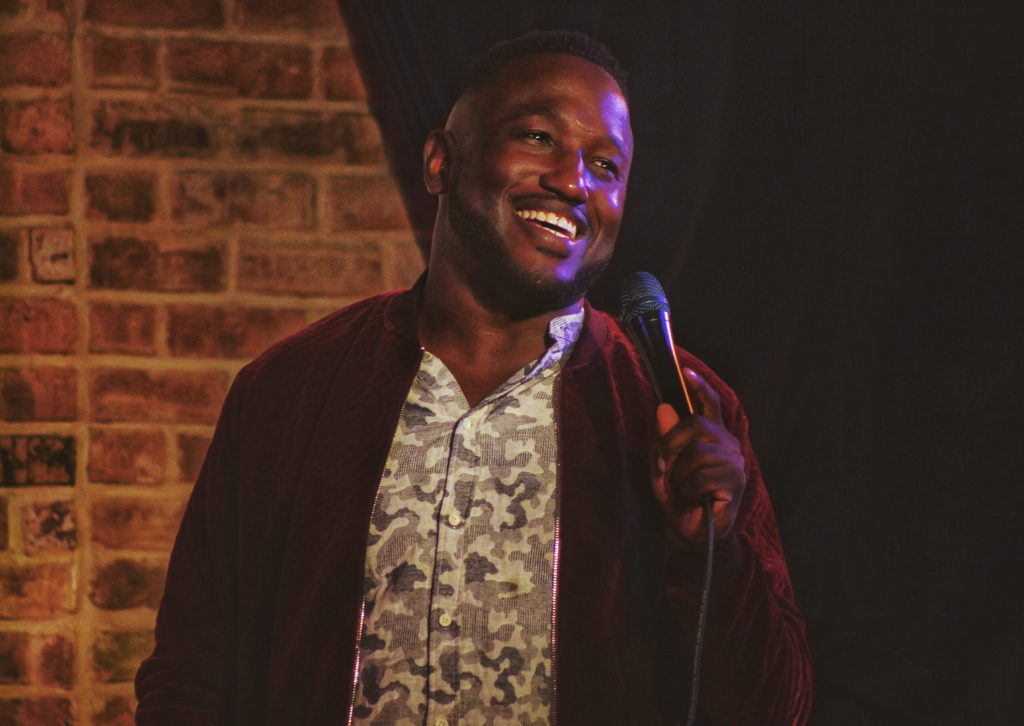