Beginning Friday, November 15th renowned dubstep icon Caspa will begin a five-week residency at The Black Box in Denver. Each Friday the London-born producer will curate an impressive array of international talent, playing sets that bridge his decades-spanning catalogue. Dubbed “Back to the Underground” the events will showcase and celebrate a range of artists who have continued to forward the culture. Genre mainstays including Coki, Hatcha, Matty G, Sleeper, Six Chakra, Ternion Sound, and Pushloop will all make appearances between November and December. Caspa has been tremendously influential in the classic UK sound. His decision to make Colorado a temporary home-base should be an exciting opportunity for all lovers of bass music. Get Em High contributor Colin Wrenn sat down with the man to discuss the residency as well as his musical trajectory, his love for the underground and what keeps bringing him back to Denver. Check out the interview below, and get tickets to one or all of these guaranteed to sell out shows at blackboxdenver.co or caspaofficial.com now!

Get Em High: You got the residency here, so you’re coming and staying?

What is it about Denver keeps bringing you out?

Caspa: Honestly, I’m still trying to work it out myself. As I’m getting older, I feel it’s more an energy attraction. I really believe that it draws me here, I feel so at home here. I’m just gravitated to here. I love the energy, I love the people, I love the culture, I love the food, I just like the vibe here. I feel like people are open-minded. They’re up for you playing new music, look how they embraced the dubstep early on. It was only really LA, Denver and New York.

Was Denver one of the big early representations?

Caspa: One hundred percent. It was LA that kicked it off and then Nicole (Cacciavillano) came in doing the Denver thing, then LA fizzled out and kinda went more commercial. It was a difficult time because it was transitioning from playing the UK stuff to coming out and playing next to Skrillex. I definitely threw some harder tunes in my set just to transition it over and keep it moving. It was exciting times and it was game-changing times, like I lived in LA when that was all popping off in 2011 and 2012. Then I lived in Denver in 2013 and 2014, so I was in both hubs at the time it was really crazy.

Were you popping back to London as well then?

Caspa: Yeah man, for me it was worldwide. It wasn’t just London and America it was Australia, I was in Malaysia, I was in Russia.

Is the Black Box kinda central to your attraction here?

Caspa: For me it was like when I first met Nicole. She was the one who first got me out to play Cervantes. That’s who I played for every time I played at Cervantes. And it was like I made such a good relationship with her over the years. For me I won’t play in Denver unless I can either play for her or involve her in the setup.

I played for Ganja White Night for 4/20 at First Bank. They asked me to come do that. The previous two years I had done 4/20 here (Black Box), two shows in a row then the next year three shows in a row. Ganja White Night was like come do this with us this year. I’ll do it, but I’m staying and on the Tuesday I’m throwing a $5 party. I done it and it sold out in ten minutes.

For me that is why I do it. Don’t get me wrong, it’s a living and you want to earn the money but it’s so important to keep that connection to where it’s all come from is the underground. And Nicole manage to attract that when she was at Cervantes and she was like look I’m thinking of buying a club. I was like as soon as you buy the club you know I’m playing for you all the time. My word. I only play for Nicole, unless it works in with her. Because she’s so pivotal to this scene here, and not just dubstep, bass music. If it wasn’t for her so much of the stuff that happened wouldn’t have happened.

Do you think the culture has maintained with the same vibrancy as it started with?

Caspa: I feel like when it first come around no one understood what the culture was about. That’s when everyone was gravitating towards EDM. As that’s gone on and people have kind of worked it out I feel like they’ve absorbed themselves into the culture of what it is, it’s a sound system culture. It’s meant for clubs like this, not for stadiums. That’s really help spawn the next generation of artists and fans, cuz they’re into the deep stuff. They’re really into the heavy, wonky, minimal. It doesn’t have to be so aggressive anymore.

What’s up with the residency?

Caspa: It was kinda an idea between a team of people around me. Whatchu think about this idea? I was like. Yeah. This is a sick idea. We can do the Fridays here then the Saturdays we can go and fly somewhere else, because Denver’s a great hub. That was the plan to keep it not so heavily tour based where I’m like DJing constantly. I can enjoy my time off, my family is coming over with me. 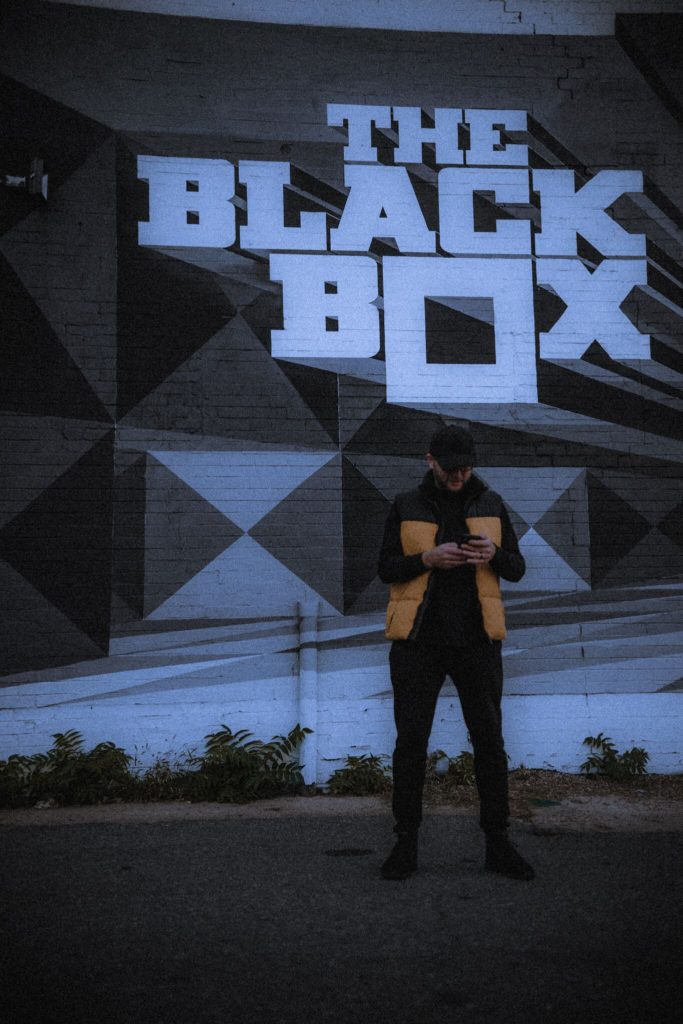 It looks like you’re bringing on a lot of talent with the residency?

Caspa: It was important, when we done it, it was like it’s gonna be a five-week event. We could just do me and someone else and try and do that and it would probably work and sell out. But it was like it’s bigger than that, this is more of a statement. It’s me and the scene, not just me. We invited a bunch of people, we didn’t really tell em too much about it. The ones that were kind of gravitating to it were like let’s do it, let’s do it, let’s do it. And the ones that said no are now like “oh fuck.” I just wanted to see what their natural reaction was.

Can you tell me a little bit about how you got your start?

Caspa: I remember just listening to a lot of UK Garage. Buying records and stuff. Really started listening to a lot of darker stuff. Wow what’s this sound, started following a bunch of artists and buying their records. Then I found out there was a really small underground night and it was called FWD – forward.

That was my first experience. I went down there and there was maybe 10 people there. Tiny. Want to go back to the real underground let’s do it in the kitchen. That’s how the scene started, it was a bunch of likeminded people who were in Garage and kind of early transition Garage into Grime. They were all playing 140 dark kind of vibey stuff. It was like where can we put this, and it’s forward thinking music. You come there and you could be playing down there and Skepta just turns up and jumps on the mic, there’s 100 people in the room.

I just got into it by being there at the beginning, knocking around, loving the music, being obsessed by it.

Since things swelled and kind of came back, do you think people are still loving dubstep?

Caspa: I think it really hit a slump in America, where it was not sure where it was gonna go. And the heavy stuff was kind of getting, okay, we know this now. The only thing that keeps it moving is the next generation.

You think these young guys are carrying the torch?

Who are some of your favorite coming out right now?

Caspa: Recently Eazy Baked, MeSo, I love what EPROM is doing even though he’s been around for a while, Peekaboo. We had Peekaboo here for 4/20, nobody even knew who he was.

You don’t wanna be one of those bitter old dubstep men. “It’s so noisy.” (laughter)

Caspa: I wanna do a big big tour.

Caspa: I’d love to. Stateside for sure. The UK I’d love to, the scene is very particular because drum and bass is king.

Caspa: I just wanna say big big thanks to the Denver and Colorado community and especially the Black Box and all the family here that have always embraced me and showed me so much love and appreciation. Honestly mate it’s so touching. I love it I really do. And I’m just gonna continue to keep writing sick music. And if people want to get a grasp for what I’m gonna bring to the Black Box, if they go on my Soundcloud I got a whole series called Mix.0. I’m on number six now. And that is pretty much all the people I’ve been supporting and playing. 75% of it is dubplates, unreleased. I always point people to that. Just respect to Denver, I look forward to it. 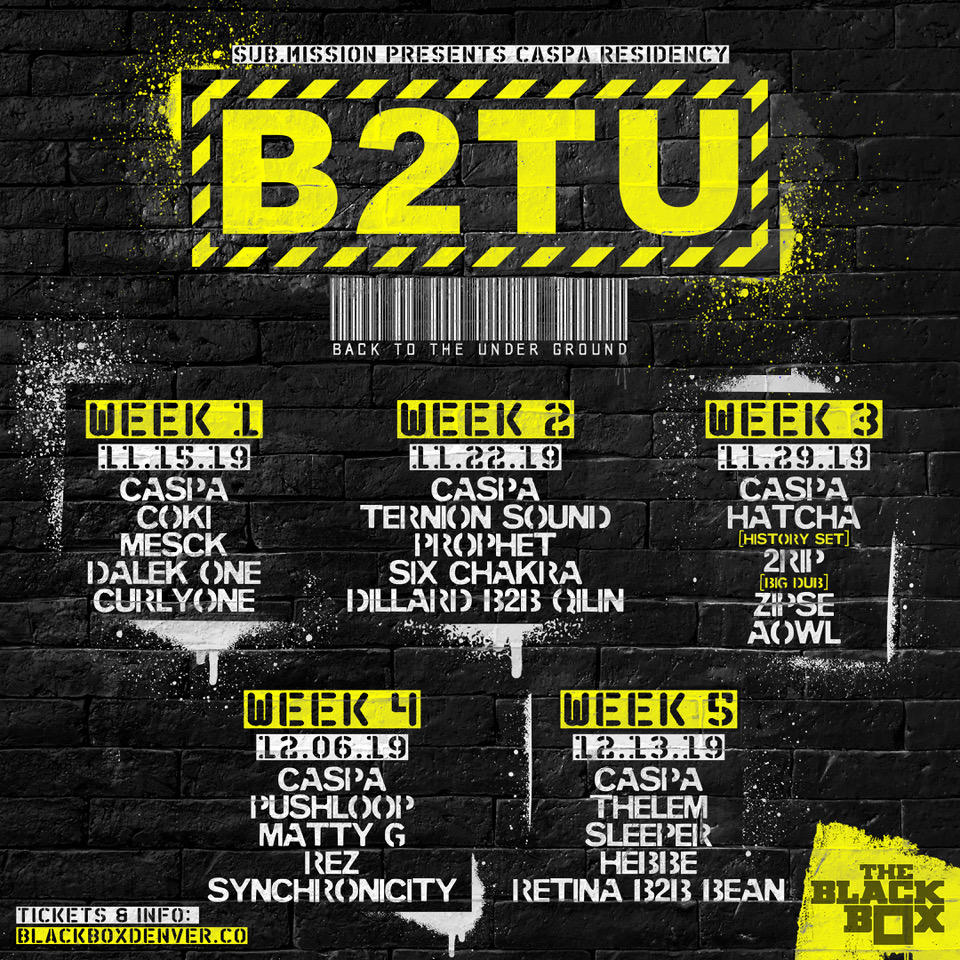