Legendary Los Angeles duo Blu & Exile are back at it, touring North America in support of their brand new EP True & Livin’, released earlier this month. The tour will also feature the rest of Exile’s Dirty Science crew including Pistol McFly, Dag Savage, SirPlus as well as LA native Choosey, who just released his excellent sophomore album Black Beans last month. We’re proud to be teaming up with our friends DJ Low Key & DJ Lazy Eyez to present the Denver stop of the tour for The Solution Showcase #20, hosted at The Black Box in capitol hill on June 2nd. With opening performances from Denver’s own Fast4ward and Sedrick Avenue, this is sure to be a great night of hip hop and beats on a truly spectacular sound system. Seeing Exile flex on the MPC live is definitely a sight to see, and catching him performing alongside Blu himself is rare opportunity you don’t want to miss. Get tickets at www.blackboxdenver.co now, and be sure to get familiar with Blu & Exile’s latest drop “True and Livin'” out now on spotify and all other major platforms.

Get Em High: What’s good! You guys are about half way through the True & Livin’ tour dates, what’s been the highlight of the tour so far?

Exile: So far I’d have to say Chicago as far as crowd energy. A lot of love out there. But it’s all been amazing really. Also New Orleans since we had a day off and got to really see the city. Also the mcs we rocked with were incredible.

GEH: Between the whole Dirty Science crew there’s been a ton of new music lately, for those who aren’t caught up what projects are out and what’s in the pipeline?

EX: Out now we have the Dag Savage Ep (Ft. Fashawn, Blu, and The Last Artful, Dodgr), Pistol Mcfly – Road Trip , Choosey And Exile – Black Beans, Cashus King – It’s not you it’s Me, Blu and Exile – True and Livin.

GEH: With the whole crew on tour, should fans expect individual sets or more of a family style performance?

Choosey: I’d say a bit of both. We all bring our own individuality to each show but that Dirty Science style remains. We al have songs on each other’s projects so, who knows what beat Ex will throw on? He did the all the sets back to back. If it’s a posse cut, we all may end up on stage rockin together. I guess you gota come out to see it.

GEH: (Exile) Over the years you’ve played a role in the careers of some legendary artists like Blu, Aloe Blacc, etc. what do you look for in a new artist to do a full project with?

Ex: Number one is our chemistry as homies and creativity. As I learn about them as people and artistically, I imagine songs and then albums even. I love to talk with them about album direction and build a mutual excitement around the ideas that allows us all to put into the idea pot together and then start cookin’.

GEH: The MPC is obviously a huge part of your live performances, but do you take advantage of any newer technology or programs in the studio or are you still banging out these beats on the classic hardware for albums like “True & Livin’” and “Black Beans.”?

Ex: All MPC … I do additions in other programs and software but it all starts with MPC.

Ex: “Spread Sunshine” (off True & Livin’) and “Familia” off of Black Beans.

GEH: Where does the name Exile come from?

Ex: Well I wrote damage for graffiti but I was dj baby Huey lol not tite. I wanted my Graff and dj name to be the same but I didn’t want to be dj damage. So I hit my crew mate brail from kog LTS and asked what would be dope dj name and Graff name. He crowned me Exile.

GEH: If you could work with any established artist, who would you choose?

GEH: Which artist that you HAVE worked with has surprised you the most?

Ex: Blu. We did it again. Wait til you hear.

GEH:Thanks, and we’re looking forward to the set – any last thoughts or shoutouts? 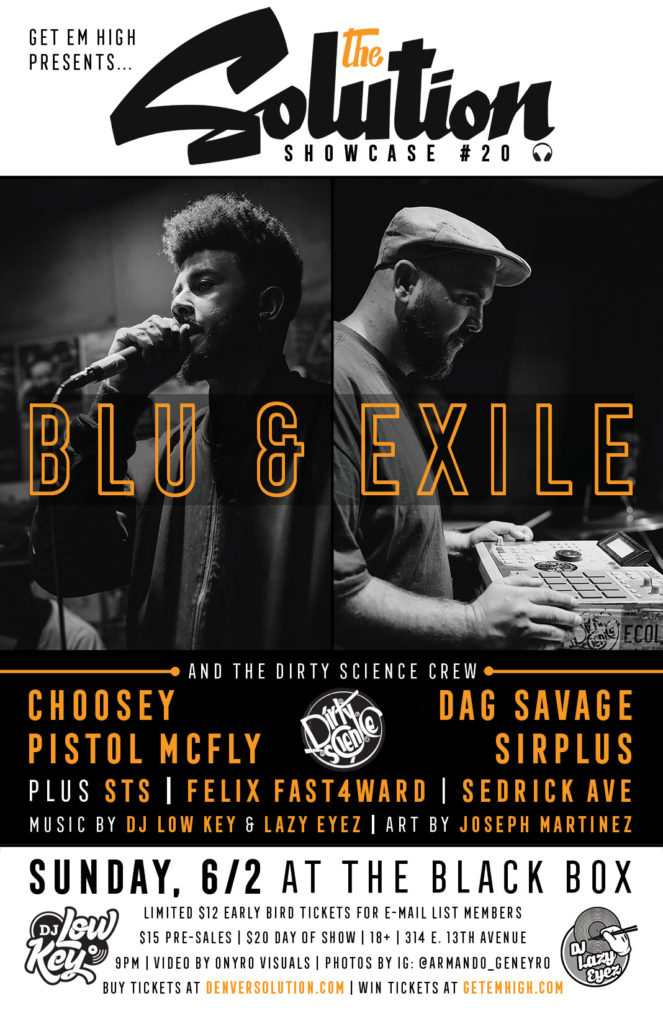