Album Review: A Tribe Called Quest – We Got It from Here… Thank You 4 Your Service 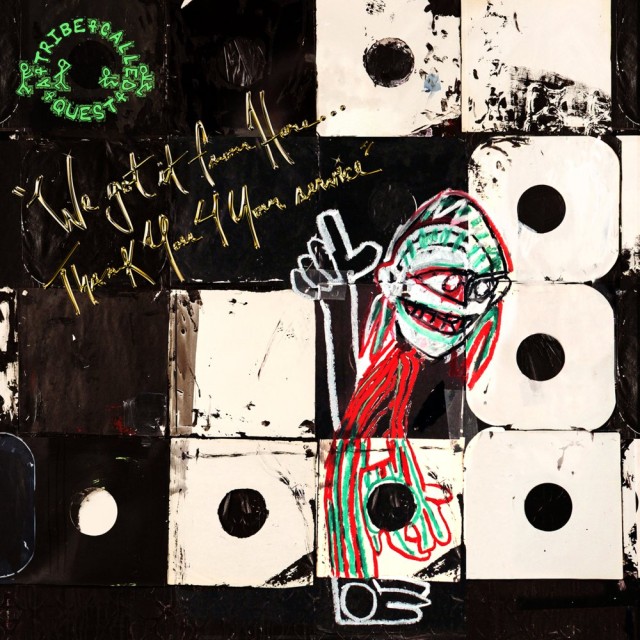 On Tuesday November 8 Donald Trump was elected to be the 45th president of the United States. On Friday November 11 A Tribe Called Quest released their sixth and final LP We Got It from Here… Thank You 4 Your Service. No one knew, and doubtfully expected that at the time of the release that these would be the circumstances. Even without having been able to see the future, Q-Tip, Phife, Ali Shaheed Muhammed and Jairobi produced fourteen tracks that perfectly capture the particular anxieties of our world gone mad. Even if Trump had not been elected, the racist, self-centered and overtly capitalist culture that allowed him to reach the White House would still be thriving — a fact that can be heard in the sometimes subtle and nuanced, sometimes more overt distress evident in each song. It is not only both simultaneously desperate and hopeful, but the sound seems to have been concocted to provide strength and joy — a particular sustenance designed specifically for desperate times. The militant desire to remain positive against a threatening backdrop runs through each song — darker elements always find a way to intersect an unyielding funk.

Since the release of their last album the climate of hip hop culture has changed. Few old heads are left preaching the importance of the original four elements. Cultural aspects became irreversibly fused with the paper chase. Even the most conscious of emcees still spit about the importance and glory of gettin’ money. Hip hop business and hip hop culture are now for the most part inseparable. This was not always so. When the Native Tongues crew emerged many of the illest in the game presented themselves in direct opposition to the forces of capitalism that threatened to pervert the art form. A&R reps and whack emcees were exposed by the likes of De La Soul and Tribe for what they were — wolves in sheep’s clothing trying to cash-in on and exploit the talents of those who were changing the world from the bottom up.

The game has changed since then. The way music is consumed has transformed — making many of these shady labels irrelevant if not entirely defunct. Many of the artists who were at risk of being exploited have become institutions in their own right, Tribe included — and the newer generation has had a chance to flourish, owing a great deal to forefathers who paved the way. It is indeed easier and perhaps more appropriate to flaunt your wealth on a road established by the progenitors of the craft, who were in many cases unintentional in their humility. Greater resources make for easier bragging.

Kendrick and Anderson Paak both appear, bridging this gap. So does Busta sounding better than he has in years. There is a consistency amongst all of the features on the album that would suggest that the creative space formed for its making was particularly sincere. Multiple generations are riding the same beautiful wavelength in a way that allows all to shine.

I almost always blast music from the windows of my car. You can hear me coming down the block in any neighborhood, the music is often noisy, explicit and occasionally egregious. I was stopped at a stop light the other day, I heard a whistle from the Jamaican man next to me — he motioned for me to turn it down. He then asked me what it was, smiled, raised his fist in the air, “great music man.” This is the first time this has happened in years. The implications seemed obvious — solidarity followed the sound. The music is so obviously filled with meaning — it has the quality of being undeniable.

Much of the music that I play is loud and aggressive and I’m not always one hundred percent proud to be bumping it so recklessly. Abrasive noise and lyrics all seem to say “get the fuck out the way”. The vibe of much of the stuff — even the stuff of excellent quality — is a middle finger raised high. It is obtrusive, unyielding, sonically selfish. The sounds that characterize Maybach Music, Future, YMCMB and Kanye’s G.O.O.D. are undeniably egotistical. There is also a great deal of quality to be found in the mainstream. I am a fan of a sizable portion of each camp’s body of work — but I don’t feel the same way blasting them the way I do Tribe. After sixteen years they are still making music of immense quality seems to resonate in a deeper way with great swathes of people.

Listening to Tribe’s new album in this environment has been the shock my system needed. It is a reminder that the value of the art and the love involved is always more important than what material gains can be brought about from its formation. It is a suggestion that it may be time to put down the middle finger and find ways to be creative that don’t rely solely on being the illest, and more to the point the wealthiest. If being a baller is the highest honor, then we all ought to look to Trump for inspiration. I’m not trying to say that money in hip hop is a bad thing, quite the contrary — wealth and success are fantastic and essential, but the blind glorification of greed that has subtly crept into normalcy could do well to be put in check.

It would be wrong to suggest that hip hop at large has been infected with a Donald Trump mindset, but the poignancy of this album cast against the news that he will be the new leader of the free world has raised concerns. An endless drive for expansion, even if it seems to be for the right reasons has unintended consequences. People get crushed when everyone wants to be the boss.

No one knows what is going to happen going forward. Many people are afraid, and rightly so. We Got It from Here is a powerful display of the fact that even when times are at their most corrupt and the horizon has never been more blurry, nothing can stop the funk.