2 Chainz has proven to be much smarter than people want to give him credit for time and time again. This time he holds is own against Nancy Grace and a panel of media personalities. Chainz eloquently argues many great points on behalf of recreational weed legalization, and in spite of Nancy’s condescension and disrespect, he keeps his cool. Unfortunately, theres no getting through to her. This debate is hilarious, and interesting to say the least. Watch it and see who you think wins. We’re going with Chainz. 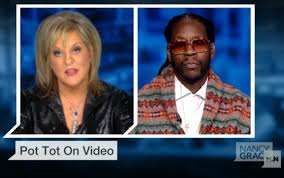